Development of the crop 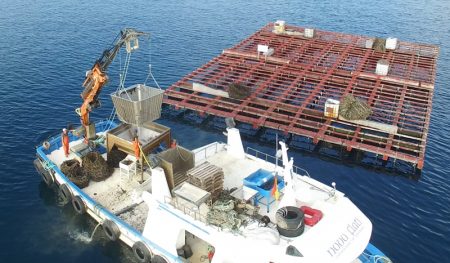 The mussel cultivation had its development within the framework of the European Union and a more incisive way during the last 30 years, although in Galicia it had already begun more than 50 years ago. Later there was an increase in the production until the early 80’s to pass later to a constant improve, sometimes with a very important result.

The Producer’s Organization of Mussels from Galicia (OPMEGA) is the main company of mussel farmers in this Community and currently comprises 11 delegations, with presence in all areas of Galician coast (Vigo, Pontevedra, Arosa, Muros-Noia and Ares-Betanzos) and approximately 753 registered rafts that belong to almost 522 producers.

This traditional sector is based, in most cases, on family-type farms that operate in floating structures or tanks from which this famous and profitable product hangs.

Currently there are about 3,300 rafts dedicated to the mussel cultivation of this species that produce an amount of 270,000 MT per year in Galicia, representing 94% of Spanish production and 50% of the world production. 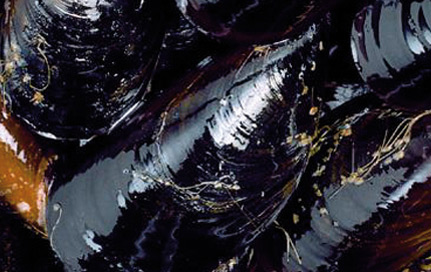 The mussel is a bivalve mollusk whose scientific name is Mytilus, the two most common European species are M. edulis, most developed in Northern Europe and M. Galloprovincialis, widely developed in the Iberian Peninsula coast.

The first specie reaches it sexual maturity at the age of one year, while M. galloprovincialis begins to mature at 40-50 mm which corresponds to 6-7 months of age and reaches 8-9 cm (commercial size) in a year and a half. Both species, whose morphology is similar, present different physiological characteristics.

For a long time and until no genetic techniques have been developed, they have been confused, the cause was for their great capacity of hybridization.

Mussel presents separated sexes. Females have an orange flesh, but males take a pale yellow flesh or a whitish color. However, hermaphrodite specimens (both sexes at the same time) may appear, and they can be recognized because their flesh takes an intermediate color.

Fertilization is external. The gametes, spermatozoa and oocytes, are released into the water where fertilization takes place. The larvae, after 1-2 months of planktonic life, depending of the time of the year, takes a metamorphosis adult mussel aspect and they are fixed to the first thing they find, having affinity to the filamentous type substrates.

Therefore, the collectors used to capture the natural environment are ropes.

The amount of oocytes that a female can produce it depends on its size. So, along its life the number will increase reaching 25,000,000 egg that a sample about 9 cm can produce, although it has been estimated that at most only 10% can develop.

There are sexually mature specimens along the year, but in Galicia there are two periods of massive reproduction:

They are mollusks that filter organic material suspended in the water and where phytoplankton represents a percentage of the amount. When they are larvae, a high concentration of these seaweeds influences their rapid growth and development.

On the other hand, the absence or low concentration of seaweed is one of the factors that cause great deaths.

The filtration rate or amount of water that passes through its gills per unit of time, is directly related to the size of the specimens, so a 5 cm mussel can filter 5 liters / hour.

By extension, the mussels of a rope are capable of filtering a day not less than 90,000 liters of water and those of a raft about 70 million liters at the same time.
When the mussel is allowed to grow in an uninterrupted way, its life ranges from three to four years, and in areas with no predators (starfish, crabs, octopus, shellfish and certain species of fish) fifteen years, although exceptionally mussels of twenty-four years have appeared.